When Dr. Lavelle was explaining the characteristics of a strong acid, he mentioned how "oxoacids more readily lose H+ if resulting anion is stabilized by electron withdrawing atoms delocalize and stabilize the negative charge"? What does he mean by this?
Top 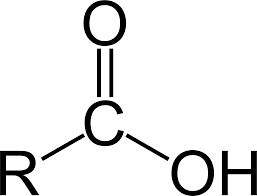 This makes the charge more balanced, the conjugate base more stable, and the original acid a stronger acid that another acid that just has -COH.
The other method of stabilizing the negative charge on the oxygen is to have an electron withdrawing group, something with a high electronegativity or that would create a dipole towards itself, attached to the same atom as the oxygen. The example used in class was Cl3COH, where the 3 chlorines are all attached to the central carbon which also has the oxygen attached. When the proton is lost the O attached to the C will become O-, however, the Cl atoms are electronwithdrawing, so they will pull the electron density towards themselves and away from the O. This creates a more even electron distribution and an overall more stable conjugate base, which means that the original acid is going to be rather strong. H3COH would be a weaker acid because it does not have the electron withdrawing ability that the Cl3COH does.
Top

Also, the bonds for a strong acid are very easy to break when they are dissociated in water. This means that the H+ ions will lose an electron and it will go to the other element, the weak conjugate base.

The hydrogen loses an electron and the chlorine gains one because that is how they are most stable because they have their outermost orbitals filled. Now, the Cl-, the anion, has a negative charge but is more stable.
Top
Post Reply
3 posts • Page 1 of 1